You are going to read my commentary on a very important verse from Bhagavad Gita. If you have read my book, you may recall that I have talked about the discrimination between subject and object. The other terms for this include Purusha and Prakriti, Kshetrajna and Kshetra, Brahman and Maya, Shiva and Shakthi, Vishnu and Lakshmi, witness and the witnessed etc.  Rig Veda says that the truth is one in spite of being called by many names by wise people (ekam sat viprah bahuda vadanti). You can apply it here. Even the concept of Yin and Yang of Taoism roughly translates to these two concepts. All these names that I just said point to two apparent realities that you see from the actual One reality.

From this, we can derive three statements:

Adhi Shankara made the same statements but used different terminology.

(I am quoting from https://www.holy-bhagavad-gita.org/chapter/13/verse/2 for the transliteration and translation)

In Gita, the Brahman,  (including the aspect of Maya, the witnessed), is personified as Lord Krishna. Krishna is talking to Arjuna in the battlefield. Here the words kshetra and kshetrajna are used instead of the subject and the object. It is very important to note that Kshetrajna is not only the knower of the body but the knower of everything. No, it doesn’t mean kshetrajna is omniscient!.. It simply means kshetrajna is the knower of everything that happens in the field of consciousness: five sense perceptions, organs of the body and the body, your likes and dislikes, your thoughts, memory and intellect.

There is another word called sarvajna. It is usually understood as omniscient. But sarvajna means all knower; this actually means that it is the all knower of the content of consciousness. One who is established as a witness or the one who has realized his true nature is also called as sarvajna.

The discrimination between kshetra and kshetrajna, or the subject and object is very important in the spiritual path. You may recall my previous posts regarding this topic:

Witnessing Meditation by Osho – A Technique of Everyday Mindfulness

I used the tools that technology has provided to make things colorful and appealing. I have been already trying to explain certain subtle things using images, infographics, comics etc. Such a variety will help you  to focus easily and remember about certain important things. This time I am trying my hands on some animated gifs. I was playing with an app today and it was really helpful for making these animations.

I have created a three level meditation by combining the concepts of classical conditioning, meditations in Vajrayana Buddhism and Dhyna, a yogic meditation. You can read the full instructions here: A Shamatha Meditation Based on Symbolism, Visualization, Mnemonics and Classical Conditioning.

There is an image which is needed as a visual meditation aid for this meditation. I have included several copies of that image in the page itself. But I am including an animated one here. You can download and see it in your phone:

By the way, do you mind if include a picture of mine? As I was playing with the app, I also tried editing one of my pictures and it was fun. This pic is just for my friends (for you, I mean ). I just wanted to say a ‘hi’ with a smile, standing before the falling waterfalls and moving clouds.

Karthikai Deepam is a Hindu festival celebrated on the fifteenth lunar day of the month of Kartik (November–December). This year it falls on today, November 23rd.

The festival is celebrated at night by decorating various parts of the house and balcony with oil lamps. These days some use candles too. It is beautiful to look at the neighbourhood in Tamil Nadu, India after 6:30 PM. Stairs, walls and windows of every house can be seen as an ocean of light.

The following images show some example decorations (the images are from Google image search): 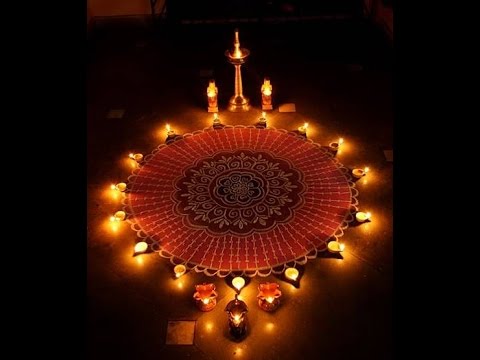 Last year, on this same day (Nov 23) I published my first book ‘The Truth About Spiritual Enlightenment: Bridging Science, Buddhism and Advaita Vedanta‘. (But last year Karthigai Deepam fell on Dec 2, 2017). So, it has been exactly one year since the book was made live! The book is doing quite well and I thank all the readers who bought this book for  supporting. 🙂

I am working on another book titled ‘The Story of God: A History of World Religions and Spiritual Enlightenment‘. This book is going to be a long term project and it is going to present the history of spirituality as accurately as possible. I am going to adopt a pure historical method. This book is not just going to be a history book, but a guide to spiritual enlightenment from a historical perspective. I am pretty sure that this book will give a totally new and fresh outlook on the past. I think it may take another year (or two, if necessary) to complete it.

I wish everyone a happy Karthikai deepam!