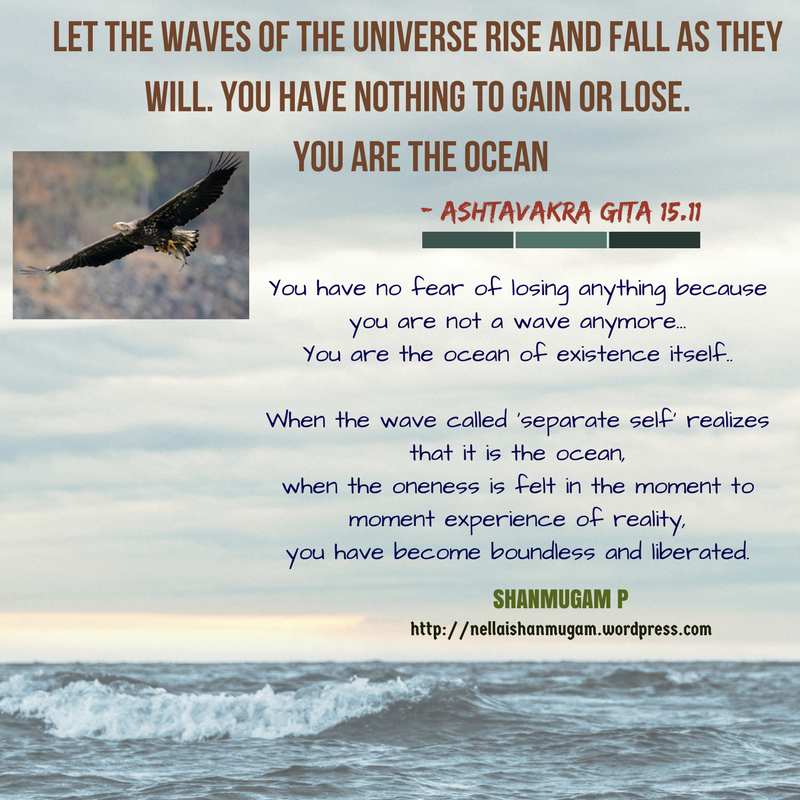 Watch this video to know more about Ashtavakra Gita and sage Ashtavakra:

Exact date of composition of Ashtavakra Gita is not known. While the text is traditionally attributed to Ashtavakra himself, some scholars believe that the text was composed a little before Gaudapada’s period or after Shankara’s time.

Both Ramakrishna Paramhamsa and Ramana Maharshi have quoted and appreciated Ashtavakra Gita for its deep wisdom.

Osho identified the similarity between Ashtavakra’s teachings and the teachings of Lao Tzu:

“Just a few days ago I was talking about Ashtavakra. Yes, he is exactly like Lao Tzu; he also praises the quality of sublime laziness. He calls it ALASI SHIROMANI. the emperor of laziness, a great king of laziness, the highest peak of laziness. But remember, inactivity plus energy, plus vitality. And not a single effort has to be made, because in the effort so much energy will be wasted that you will be less radiant. And God comes to you only when you are so vital — optimumly vital, optimum… at the peak — that you cannot be any more vital. At that peak you meet the divine. Your highest energy comes closest to God’s feet; God’s lowest energy is closest to man’s highest energy, and there is the communion.”

The English translation of the book is available for free here:

Here are some of the verses that I found to be very useful for seekers and deep in meaning:

1.8 The thought: “I am the doer” is the bite of a poisonous snake. To know: “I do nothing” is the wisdom of faith. Be happy.

1.13 Meditate on this: “I am Awareness alone–Unity itself.” Give up the idea that you are separate, a person, that there is within and without.

1.20 Just as the same space exists both within and without a jar, the timeless, all-pervasive One exists as Totality.

3.10 A great soul witnesses his body’s actions as if they were another’s. How can praise or blame disturb him?

15.6 Realize Self in All and All in Self. Be free of personal identity and the sense of “mine.” Be happy

15.11 Let the waves of the universe rise and fall as they will. You have nothing to gain or lose. You are the ocean.

16.1 You can recite and discuss scripture all you want, but until you drop everything you will never know Truth.

16.8 Indulgence creates attachment. Aversion creates abstinence. Like a child, the sage is free of both and thus lives on as a child.

16.10 He who claims liberation as his own, as an attainment of a person, is neither enlightened nor a seeker. He suffers his own misery.

17.4 Rare in the world is one who does not relish past enjoyments, nor yearn for enjoyments to come.

17.17 The liberated one neither avoids experience nor craves it. He enjoys what comes and what does not.

18.9 Knowing for certain that all is Self, the sage has no trace of thoughts such as “I am this” or “I am not that.”

18.37 Because he desires to know God, the ignorant man can never become That. The wise man is God because he is free of desire and knows nothing.

18.40 For he who thinks knowledge is things and ideas how can there be Self-knowledge? The wise do not see separate things– only the timeless Self.

18.42 Some believe in existence; others believe nothing exists. Rare is the one who believes nothing and is never confused.

18.43 Weak intellectuals may believe the Self is One without other. But being mired in illusion they do not actually know Self, so live out their lives in misery.

18.49 The sage does whatever appears to be done without thinking of good or bad. His actions are those of a child.

18.55 Though his servants, sons, wives, daughters, grandchildren and all his relatives ridicule and despise him, the yogi is undismayed.

18.56 Though pleased he is not pleasured; though pained he does not suffer. This wonderful state is understood only by those like him.

18.58 Even doing nothing the dull one is anxious and distracted. Even amidst great action the wise one remains still.