I have only selected the best quotes which act as pointers to the truth and reminders in one’s spiritual journey. Th quotes are from many ancient realized men like Buddha, Lao Tzu, Meister Eckhart etc. 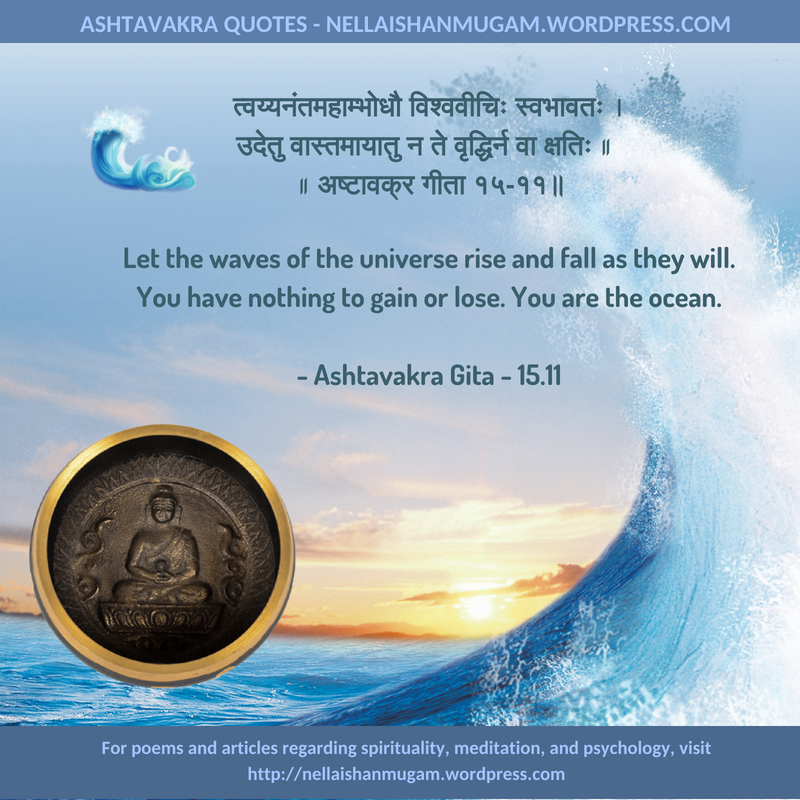 3. Love is no other than the rhythm of Tao. I have told you: you are come out of Tao,’and to Tao, you will return. Whilst you are young – with your soul still enveloped in darkness – in the shock of the first impulse within you, you know not yet whether you are trending. You see the woman before you. You believe her to be that towards which the rhythm is driving you. But even when the woman is yours, and you have thrilled at the touch of her, you feel the rhythm yet within you, unappeased, and know that you must forward, ever further, if you would bring it to a standstill. Then it is that in the soul of the man and of the woman there arises a great sadness, and they look at one another, questioning whether they are now bound. Gently they clasp one another by the hand, and move on through life, swayed by the same impulse, towards the same goal. Call this love if you will. What is a name? I call it Tao. And the souls of those who love are like two white clouds floating softly side by side, that vanish, wafted by the same wind, into the infinite blue of the heavens

4. Life is a series of natural and spontaneous changes. Don’t resist them – that only creates sorrow. Let reality be reality. Let things flow naturally forward in whatever way they like.

5. The snow goose need not bathe to make itself white. Neither need you do anything but be yourself.

6. Use the light that is within you to revert to your natural clearness of sight.

8. What the caterpillar calls the end, the rest of the world calls a butterfly.

10. If you realize that all things change, there is nothing you will try to hold on to.

12. Happiness is the absence of striving for happiness.

1. If you get shot by an arrow,it causes pain. If you sorrow,grieve or lament, this is a second pain. The wise person stops at the first pain.  (Sallatha Sutta)

4. As a water bead on a lotus leaf, as water on a red lily, does not adhere, so the sage
does not adhere to the seen, the heard, or the sensed. (Jara (old age) Sutta of the Sutta Nipata.)

5. You yourself must strive. The Buddhas only point the way. Those meditative ones who tread the path are released from the bonds of Mara. (Dhammapada).

2. A human being has so many skins inside, covering the depths of the heart. We know so many things, but we don’t know ourselves! Why, thirty or forty skins or hides, as thick and hard as an ox’s or bear’s, cover the soul. Go into your own ground and learn to know yourself there.

3. If anyone went on for a thousand years asking of life: ‘Why are you living?’ life, if it could answer, would only say, ‘I live so that I may live.’ That is because life lives out of its own ground and springs from its own source, and so it lives without asking why it is itself living.

4. If the only prayer you ever say in your whole life is “thank you,” it will be enough.

6. In this breaking-through, I receive that God and I are one. Then I am what I was, and then I neither diminish nor increase, for I am then an immovable cause that moves all things.

7. The most powerful prayer, one well-nigh omnipotent, and the worthiest work of all is the outcome of a quiet mind. The quieter it is the more powerful, the worthier, the deeper, the more telling and more perfect the prayer is. To the quiet mind, all things are possible. What is a quiet mind? A quiet mind is one which nothing weighs on, nothing worries, which, free from ties and from all self-seeking, is wholly merged into the will of God and dead to its own.

8. Now pay attention to this. God is nameless for no one can either speak of him or know him. Therefore a pagan master says that what we can know or say of the First Cause reflects ourselves more than it does the First Cause, for this transcends all speech and all understanding . . . He is being beyond being: he is a nothingness beyond being. Therefore St. Augustine says: ‘The finest thing that we can say of God is to be silent concerning him from the wisdom of inner riches.’ Be silent therefore, and do not chatter about God, for by chattering about him, you tell lies and commit a sin. If you wish to be perfect and without sin, then do not prattle about God. Also you should not wish to understand anything about God, for God is beyond all understanding. A master says: If I had a God that I could understand, I would not regard him as God. If you understand anything about him, then he is not in it, and by understanding something of him, you fall into ignorance, and by falling into ignorance, you become like an animal since the animal part in creatures is that which is unknowing. If you do not wish to become like an animal therefore, do not pretend that you understand anything of the ineffable God.

9. There exists only the present instant… a Now which always and without end is itself new. There is no yesterday nor any tomorrow, but only Now, as it was a thousand years ago and as it will be a thousand years hence.

10. Truth is something so noble that if God could turn aside from it, I could keep the truth and let God go.

11. In Islam, and especially among the Sufi Orders, siyahat or ‘errance’ – the action or rhythm of walking – was used as a technique for dissolving the attachments of the world and allowing men to lose themselves in God. The aim of a dervish was to become a ‘dead man walking’: one whose body stays alive on the earth yet whose soul is already in Heaven. A Sufi manual, the Kashf-al-Mahjub, says that, toward the end of his tourney, the dervish becomes the Way not the wayfarer, i.e. a place over which something is passing, not a traveller following his own free will…it was quite similar to an Aboriginal concept, ‘Many men afterwards become country, in that place, Ancestors.’ By spending his whole life walking and singing his Ancestor’s Songline, a man eventually became the track, the Ancestor and the song. The Wayless Way, where the Sons of God lose themselves and, at the same time, find themselves.

12. Time is what keeps the light from reaching us. There is no greater obstacle to God than time.

13.  The only thing that burns in hell is the part of you that won’t let go of your life: your memories, your attachments. They burn them all away, but they’re not punishing you, they’re freeing your soul.

2 thoughts on “Inspiring Quotes of Lao Tzu, Buddha and Many Others – Updated Regularly”