I am always amazed by coincidences in life. As I scientist, I regard them as just coincidences but the poetic aspect of me rejoices in the beauty of the connections. Many such beautiful coincidences happened today; and today is also Adi Thabasu, a festival in Tamil month of Adi that celebrates religious tolerance.

There is a beautiful temple in a town close to my city. The town is Sankarankovil, in Tirunelveli district. This temple has a story behind it. It is not history, but a story. But the story comes with a good message which served to connect Shaivism and Vaishnavism, the two sects into one.

I am including the story from Wikipedia as It will save me a lot of typing:

“The goddesses is a yogini who was performing her penance on the tip of the needle to please lord Shiva and merge with him. Two snake kings namely “sangan” and “padman”. Sangan was worshipping lord shiva and padman was worshipping lord narayana. One day they had a quarrel on who is great whether lord shiva, the destroyer or narayana, the protector. They were trying to prove their own power and finally went to the yogini and pleaded her to give them a proper judgement.

The yogini grew out of her grace pleaded the almighty to show his universality form so that not only the snake kings but also for every human being. By the intense penance lord shiva appears before the yogini in the form of half shiva and half vishnu showing the world that they are equal and it is with love and sacrifice they could reach them. Hence sangan and padman worshipped the lord and prayed to the yogini for showing them a way to attain the god and they stayed with her. the yogini was none other than goddesses gomathi. Gomathi means repository of wealth. Since the snakes stayed with the goddesses, this place is free from all venomous creatures and praying to this goddesses can eliminate the fear of venom.

My long time readers would know that I am not happy with the hatred spread by RSS and other Hindutva organizations in India. This morning, before I knew that today is Adi Thabasu, I commented on an RSS group in Facebook. Their replies were in Tamil but you can guess what they are basically saying by reading my replies that are in English. Eventually, in between the comments I got to know that today is the festive day that reminds us about religious tolerance, as I was also checking Tamil calendar app in my mobile. And what I notice among RSS members is religious intolerance and hatred. Here are the screenshots: 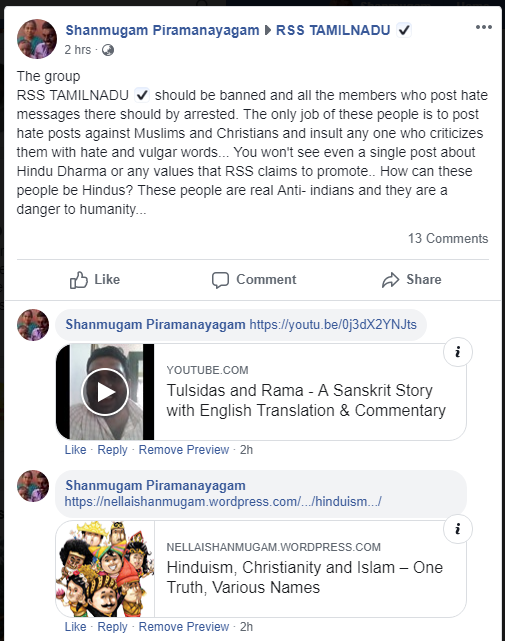 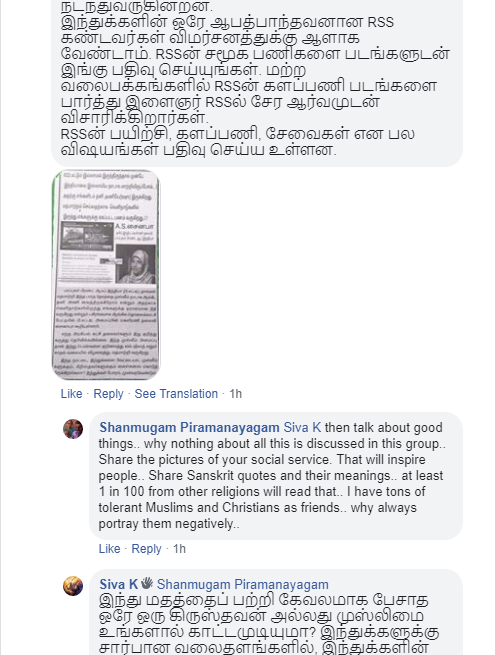 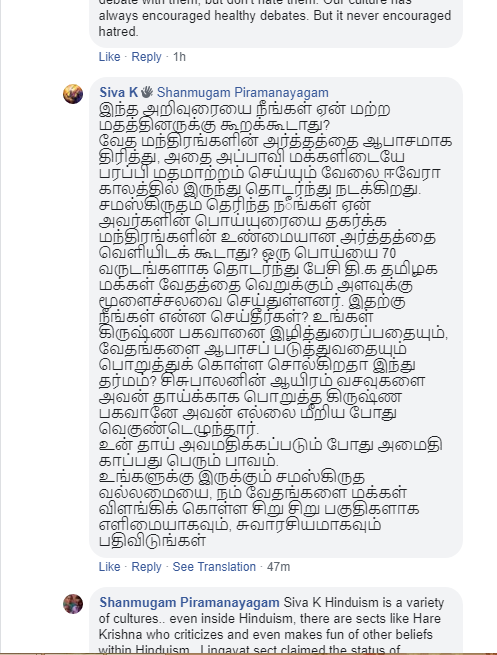 There was another coincidence too. Once I finished posting these comments, I saw this in my Facebook feed:

A birthday of a Muslim friend and a Christian friend. Both are my good friends. And coincidentally, it made me recall a conversation that I had with one of them in a post that I posted a month before:

The conversation itself was regarding religious tolerance. This is way too much of coincidences today. I am not sure if they have any other significance other than being coincidences but they are beautiful and poetic. They make me smile and I enjoy them!