The aim of this article is to show that  Vedanta as we know today and Yoga which is practiced today are incomplete when taught independently. They have lost a lot of essential teachings of ancient rishis by evolving into two separate schools.  It also  aims to show that these modern schools have deviated much from the teachings of Ancient India.

Vedanta and Yoga were never seperare during the time of Upanishads. There were not two different schools. Instead, the teachings of Ancient India mainly included the following two aspects:

This constitutes getting insight into the nature of reality and seeing that the separate self is illusory in the moment to moment experience. Practices like self-inquiry and  Buddhist mindfulness are essentially the same and are mainly insight practices. The Advaita Vedanta that we know now focuses mainly on insight.

This is often neglected in traditional Advaita but it was once advocated as a necessary skill to develop along with insight. Concentration and insight complement each other. There are some seekers who can do well by focusing on concentration and developing the insight later. But there are also seekers who are comfortable in doing insight practices first and achieve one pointed concentration later. Upasana in Vedanta (which is not taught in the modern days), Yogic samadhi and Buddhist Shamatha are practices that develop concentration.

It is definitely possible to bypass concentration practices altogether and practice insight alone. Concentration will automatically develop as a by product. But this is not true for all people. Some people are more comfortable and capable of starting with Yogic practices.Also, practicing both of them together can be very helpful towards liberation.

Because of this, yogic concentration practices and insight practices were both taught in Upanishads. In fact, there are certain upanishads which are dedicated to Yogic practices alone. They were never considered as separate schools of thought. Even Adi Shankara has elaborated on yogic and tantric practices on his text Soundarya Lahari.

The theory part of both Advaita and Yoga were adopted from Samkhya karika written by an ancient rishi called Kapila. In Bhagwad Gita, Samkhya is mentioned as another term for Gnana yoga, which is nothing but self-inquiry practices  and Nidhidhyasana of Vedanta that we know today. The terminology of Samkhya appears to be dualistic but in essence, it was not; It was actually a path for non-dual wisdom. Otherwise it would not have been mentioned in Bhagwad Gita, which is actually considered to be an authoritative text of Vedanta, along with Brahma Sutras and Upanishads. Samkhya mainly focused on discrimination between Purusha and Prakriti (satya and mithya in Vedanta) and offered insight into the reality which actually resulted in  seeing Purusha and Prakrita as one non-dual reality, even though it was not explicitely stated in Samkya sutras.

So in essence,  Vedanta, Yoga and Samkya were not really separate schools of thoughts.  These were words used to represent the aspects of the same essential teaching.  But after the period of Upanishads, people started giving more importance to Vedic rituals rather than focusing on the core teachings that help individuals towards their liberation. 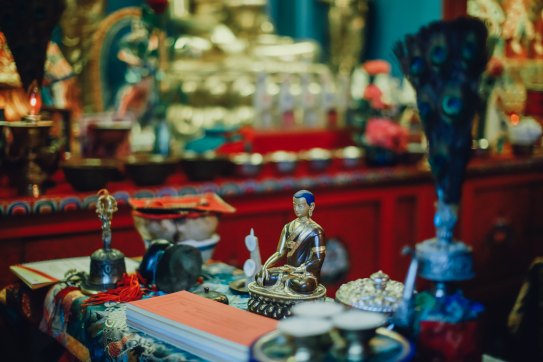 The first rebellion against this growing importance of pointless rituals was done by Buddha. He established the core ancient teachings of insight and concentration but just used different terminology. He categorized the teachings into two main paths, which are complimentary to each other.

This is essentially the same as Vedanta. Buddhist mindfulness is a practice to examine each thought and experience that arise each moment and look into the nature of their absence of a separate self, impermanence and suffering. This is exactly what self-inquiry does when you inquire the nature and origin of each thought. What was called as Nirguna Brahman (absolute reality that is empty of attributes) in ancient India was named as ‘Sunyata’ (emptiness) by Buddha. Since Buddha took a psychological approach, he intentionally used negative terminology so that people don’t form mental concepts about the absolute reality.

Buddha didn’t ignore the yogic practices of concentration. He introduced Jhana meditations which are essentially the same as Dhyana, Dharana and Samadhi. But he also explained how practicing either insight or concentration can automatically improve the other.

Buddha took an empirical approach in understanding the nature of mind. The deep psychological insights found in Apidhamma in Pali Canon, is very unique to Buddhism which is completely absent in the traditional schools of Advaita and Yoga which developed later as separate schools.The psychological wisdom found in Buddhism is compared to modern Psychology because of so many similarities between the two.

Traditional Vedanta, Samkhya and Yoga talk about three gunas which are sattva (balance), rajas (restlessness , too much activity in the mind), Tamas (inertia or mental dulness) to show how rajas and tamas are hindrances to insight and concentration. Buddha went futher and added three more to the two hindrances (panca nivaranani): Restlessness, Dulness and sloth, sensory desire, ill will and doubt.

Finally, Buddha went one step above in handling the mere curious people who wanted to accumulate factual  and theoretical information. He very well understood that such an accumulation of unnecessary knowledge may reinforce the idea of a separate self. So, contrary to the ancient teachings which taught different theories of creation (Ajativada, drishti-shristi vada, shristi-drishti vada), Buddha asked people to ignore such questions and theories and told them that these questions do not lead people to true knowledge. These questions have been termed as ‘Avyakata’ (unfathomable)  by Buddha. Sometimes, he was silent when people asked such questions which is popularly known as ‘Noble silence’in Buddhism.

Any form of teachings get clouded and polluted overtime by people when they add new interpretations, ideas and speculations. This is mainly done by curious scholars who were not enlightened and had no interest in liberation.

When it comes to Buddhism, it faced two major problems:

Adi Shankra was not against Buddha’s core teachings or Yoga. But he reestablished the core teachings of ancient India by writing commentaries and texts on both insight and concentration practices, debating with ritual oriented Mimamsa scholars and deluded Buddhist scholars.

Realizing that vedic rituals and worshipping personal deities could not be easily removed from Indian tradition, Shankara had no choice but to compromise on certain things. He accepted the worship of personal God but popularised the concept of Ishwara and taught people that they can revere their favourite personal deity as Ishwara. He divided the sects of such deity worships to six categories (shanmata), based on the six popular deities, but insisted that any personal God is the representation of Absolute reality.

But since he was pretty much aware of what was  happening to the core teachings of Buddha, he had to debate with the remaining deluded Buddhist scholars to make them accept his newly formulated teachings. But he never excluded Yogic practices that were meant to achieve one-pointed concentration and Samadhi. In fact, he praised Yoga Vashista, the text which contain both vedantic and yogic teachings and regarded Vashista, the author of Yoga Vashista as the first teacher of Vedanta. But apart from the terminology and certain culturally oriented concepts, his teachings were essentially the same as Buddha’s teachings.

Distortion of the Original teachings

Again, needless to say, Shankara’s orginal teachings were distorted. Scholars conveniently ignored the concentration oriented practices and maintained the school of Advaita based on the rest of Shankara’s teachings. Overtime, vedantins became mere intellectuals who kept repeating that all is maya. This led to 5 other subschools of vedanta which criticized vedantins as mayavadis.

At the same time, Yoga started evolving as a separate school which ignored a lot of insight present in  Vedanta. They became more focused on physical postures and chasing various experiences.

2 thoughts on “The Evolution of Vedanta, Yoga and Buddhism – A Truth Revealed”